LOS ANGELES — SAG-AFTRA celebrates the life and career of Joyce Gordon, one of the most successful commercial and voiceover performers of her generation, and the first woman to serve as president of a branch of Screen Actors Guild. Gordon died late Friday at the age of 90.

For nearly 40 years, Gordon’s image or voice were ubiquitous on television and radio. She was the on-camera spokeswoman for Crisco and Duncan Hines, she did hundreds of promos for news and sports programs, and had the distinction of being chosen by the phone company to be the voice that informed callers they had dialed a wrong number.

“Joyce was everything you could want in a SAG-AFTRA member and leader: intelligent, talented, unceasingly dedicated to her fellow performers, and a warm and generous friend,” said SAG-AFTRA President Gabrielle Carteris. “Her stature as a pitchwoman and voiceover talent was indispensable in convincing the advertising industry to take seriously the concerns of commercial performers in the early days of that contract. Our hearts go out to Joyce’s family.”

Gordon’s career took off in the 1950s, when she forged a trail for a generation of women with a series of firsts. She was the first woman to do network promos, the first woman announcer for a political convention on network television and was reportedly the first woman appearing as herself on television to wear glasses — and proudly so. She was so successful that Broadcasting magazine ran a feature article on her, The TV Girl Who Wears Glasses, in May 1960. She appeared in commercials on The Jack Paar Show, Hugh Downs and The Price is Right, often in several shows in a single day when television was live. She even appeared on the cover of TV Guide. Transitioning into recorded commercials, she became one of the most respected talents in the business. Her contributions were so significant that she earned her own chapter in Alice Whitfield’s 1992 guide to the voiceover industry, Take It From the Top. 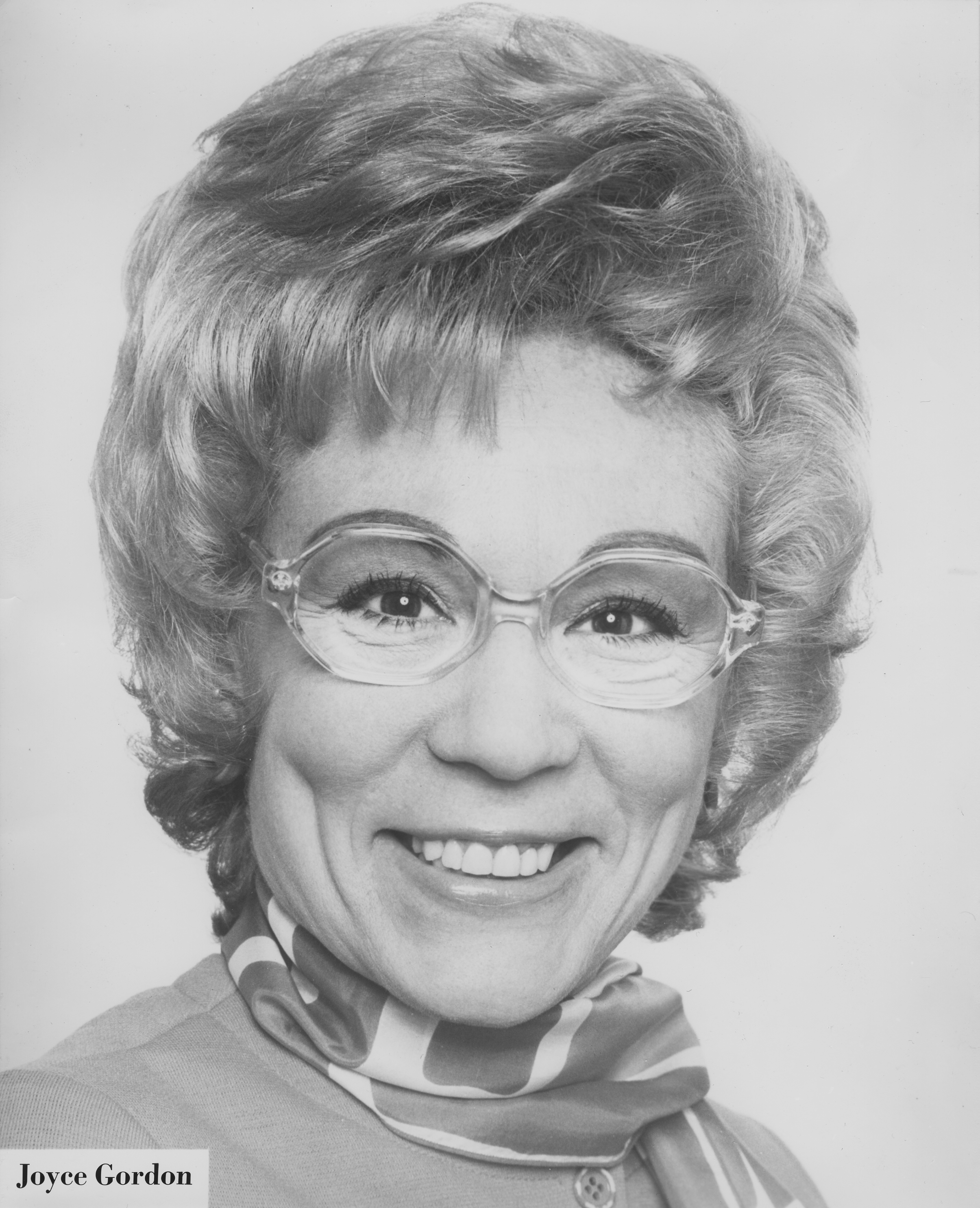 Born in Des Moines, Iowa on March 25, 1929, she grew up in Chicago, and went on to attend the University of Illinois and the University of Wisconsin. After moving to New York when she was 19, she made early appearances on radio and live TV, including dramatic roles on Studio One, Robert Montgomery Presents and Search for Tomorrow. She expanded her dramatic range with frequent dubbing of foreign stars into English. Her voice can be heard in classic films by directors such as Ingmar Bergman and Jean Renoir, and she is the voice of Claudia Cardinale in Sergio Leone’s epic Once Upon a Time in the West. She maintained her dramatic career into the 21st century, appearing as a judge on episodes of Law & Order.

Gordon was active for decades on behalf of her fellow actors. In 1959, during Howard Keel’s Screen Actors Guild presidency, Gordon was part of the first dozen branch members to serve on the National Board — the sole woman in that group of 12. In 1966, she was elected president of the New York Branch of Screen Actors Guild, a first for a woman in any branch of the Guild. In all, she served the union for more than four decades, was a trustee of the SAG-AFTRA Motion Picture Player Welfare Fund, and a longtime proponent of merger between the Guild and the American Federation of Television and Radio Artists.

In addition, she served more than three decades as a trustee of the Screen Actors Guild-Producers Pension & Health Plans, most recently as trustee emeritus. “We are deeply saddened by Joyce’s passing,” said SAG-AFTRA Health Plan and SAG-Producers Pension Plan Chief Executive Officer Michael Estrada. “She was a passionate and committed trustee for over three decades and worked tirelessly on behalf of our participants. We extend our deepest condolences to her family and friends.”

Gordon also served as a trustee of The Actors Fund for 24 years. Her understanding of entertainment professionals helped shape The Fund’s programs in the most meaningful and compassionate way. “It was a great honor to work alongside Joyce, who was a passionate advocate for our community,” said Actors Fund Chairman Brian Stokes Mitchell. “We are heartbroken at her passing and are proud of her legacy, a legacy which will live on in all the ways we help.”

SAG-AFTRA Foundation Treasurer, SAG-AFTRA Motion Picture Players Welfare Fund Chairman and former SAG New York Branch President Maureen Donnelly said, “I am deeply grieved at the loss of my dear friend and colleague of nearly 40 years. Joyce was a tremendous advocate for our union, its members and especially actors and their families. She was one of the creators of the SAG-AFTRA Foundation Scholarship in honor of Jack Dales providing crucial financial support to members and their children pursuing an education. Joyce was a passionate advocate for New York members in her work as a trustee for MPPWF.”

She was also active in her local community as a member of the White Plains City, N.Y. Council for many years, and founded and ran a successful business.

Gordon was married for more than 50 years to actor Bernard Grant, who passed away in 2004. She is survived by her son, Mark Grant; daughter Melissa Grant; grandson Dirk Jason Vanderzwan; and a sister, Jill Gordon.